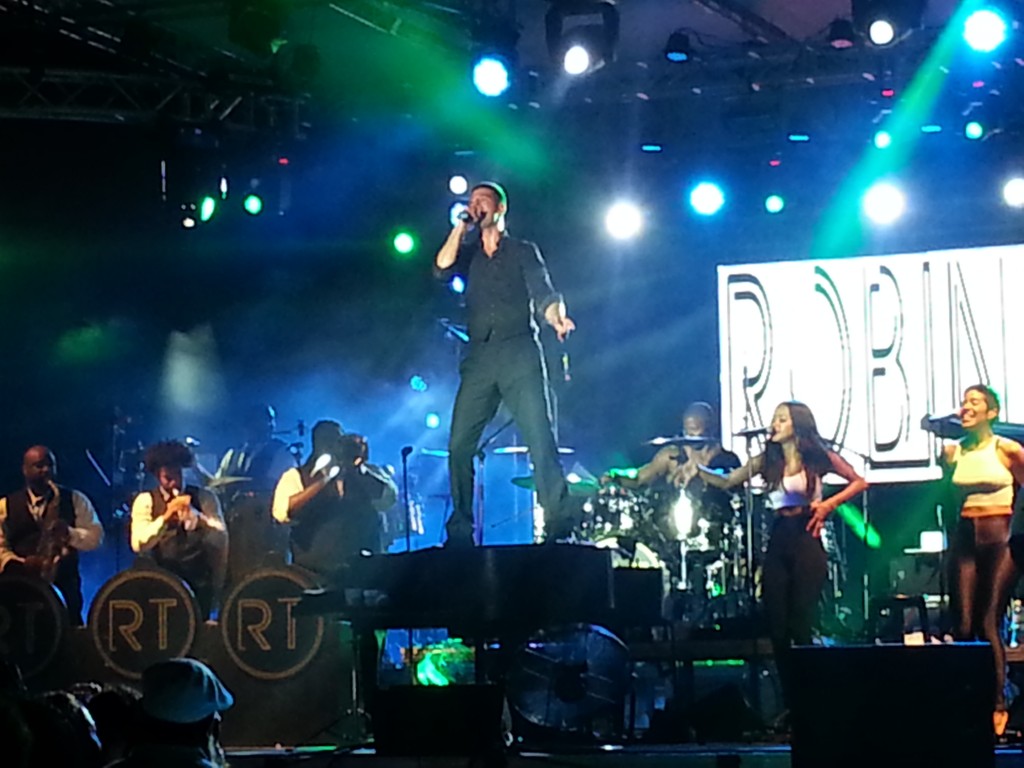 For a significant group of mature, sexy and savvy travelers, Memorial Day has become synonymous with the Caribbean island of Aruba and the Soul Beach Music Festival. Known for its line-up of world-renowned performers including Mary J. Blige, Alicia Keys, LL Cool J, Chaka Khan, R. Kelly, Ne-Yo, Chrisette Michele and Brian McKnight, the festival, now in its fourteenth year, is also an amazing opportunity for an exuberant, international crowd (predominantly made up of fans from the U.S.) to network and create lasting memories over a string of scheduled events and impromptu gatherings on this “one happy island”.

Here was our itinerary at the 2014 Aruba Soul Beach Music Festival (SBMF):

Check-in at the Divi Aruba Phoenix

Having been to several SBMFs in the past, we knew to arrive in Aruba (at least) one day early to unwind and rest up for the whirlwind of not-to-be missed activities on our Soul Beach agenda. The Divi Aruba Phoenix was the perfect resort to ease into the fun-loving and laid back spirit of Aruba. Turns out it was also an amazing place to recharge in between Soul Beach activities. Read more about our enjoyable stay on our post, Divi Aruba Phoenix Review: A Great Hideaway on Palm Beach. 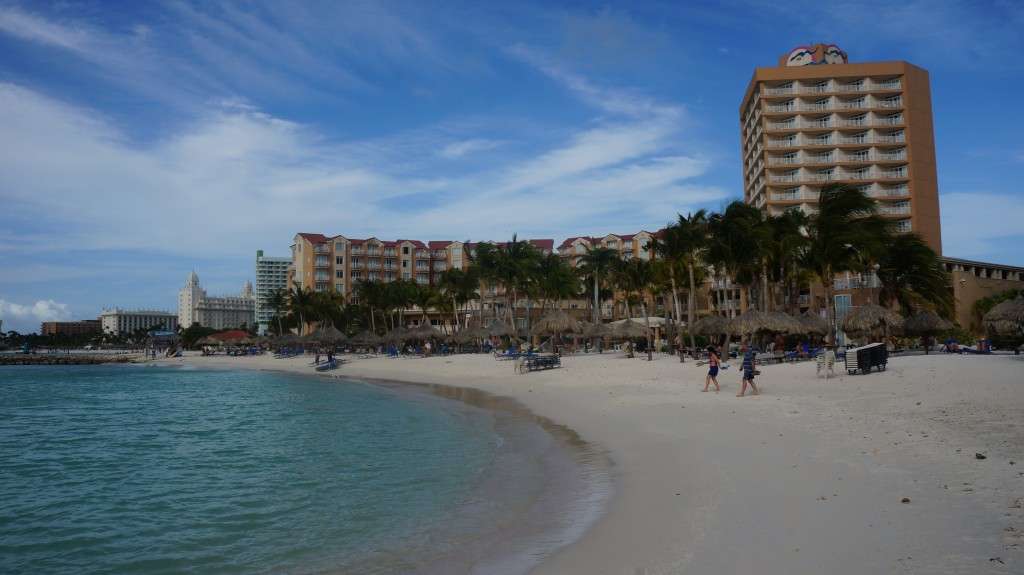 We kicked off our Soul Beach 2014 experience with a meet-and-greet at the Sand Bar, a trendy, outdoor bar and lounge where our Facebook group of Soul Beach enthusiasts could comfortably mingle and swap advice on Aruba and SBMF over tropical cocktails (we absolutely loved the kiwi mojitos!) and tasty food. After solid friendships had been forged and plans for SBMF solidified, we joined an eager crowd at Confession Nightclub for the official Soul Beach Welcome Celebration. Heart-thumping beats; flashing, neon lights and a pyro-tech mixologist made this an electrifying start to the Soul Beach Music Festival. 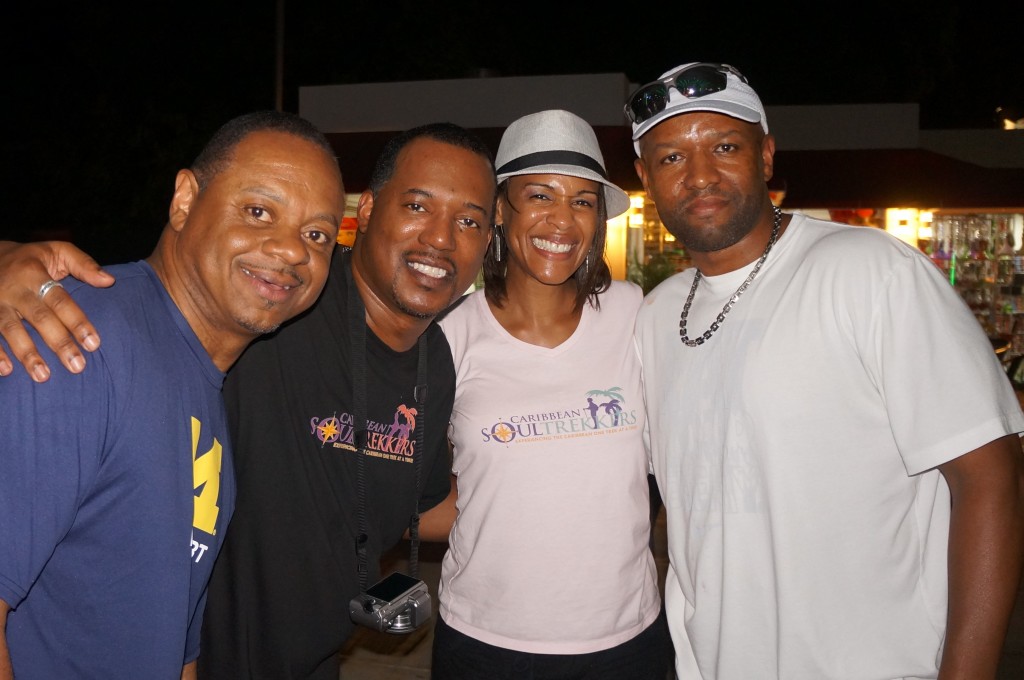 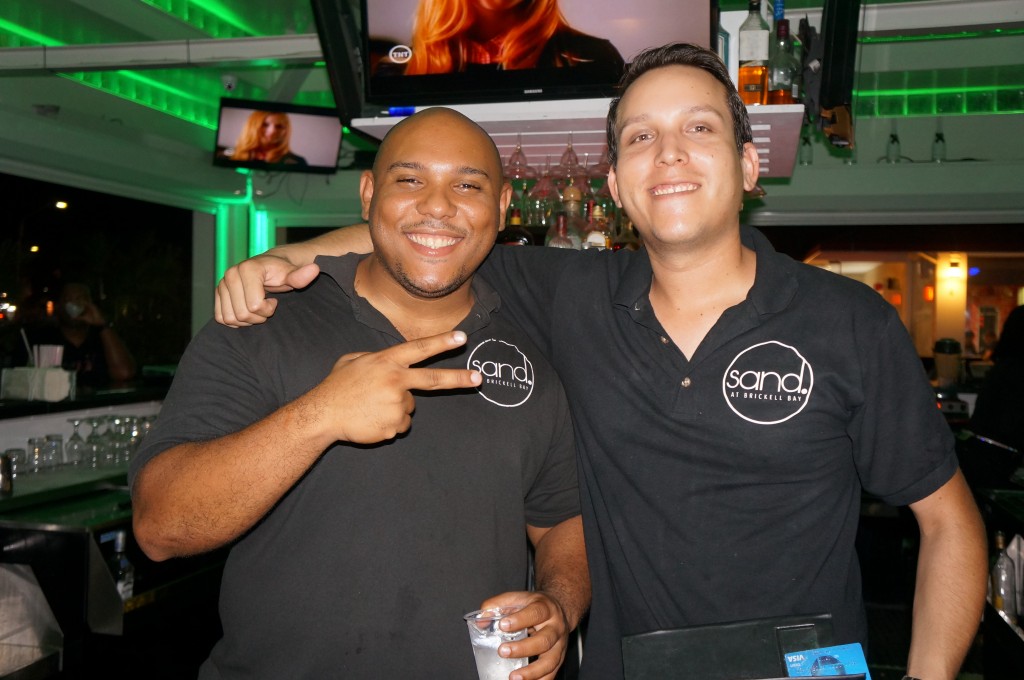 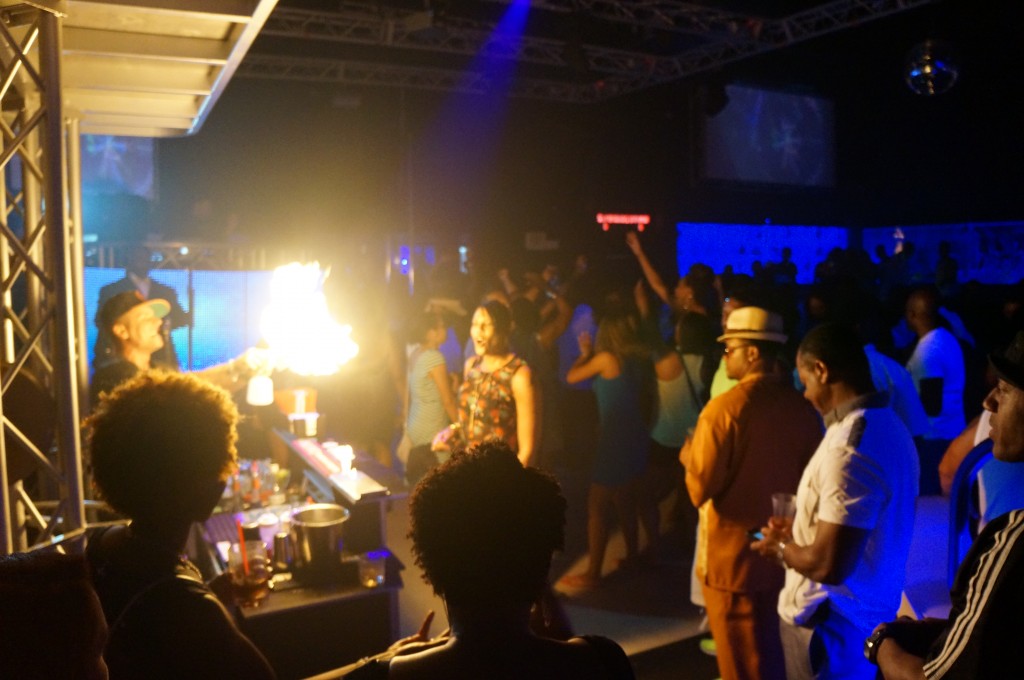 For three days, Moomba Beach was transformed into the liveliest stretch of white sand in the Caribbean and a playground for Soul Beach newbies and veterans. White sand under toes, blue sky overhead, twinkling ocean water in the background and a mixture of laughter and infectious beats in the air combined to prove there is no beach party like a Soul Beach Party! Triscina Grey from Washington DC’s WHUR radio station returned as a charismatic MC while St Maarten’s DJ Outkast took command of the turntables. Despite the sweltering heat, the high-spirited crowd jamming underneath the Red Bull tent rarely dwindled (and always tripled at the first sounds of the Wobble). Along the parties’ edges, people chilled out at the bars, lounged in sunny beach chairs and relaxed at picnic tables while enjoying cold drinks and items from Moomba’s special Soul Beach menu. 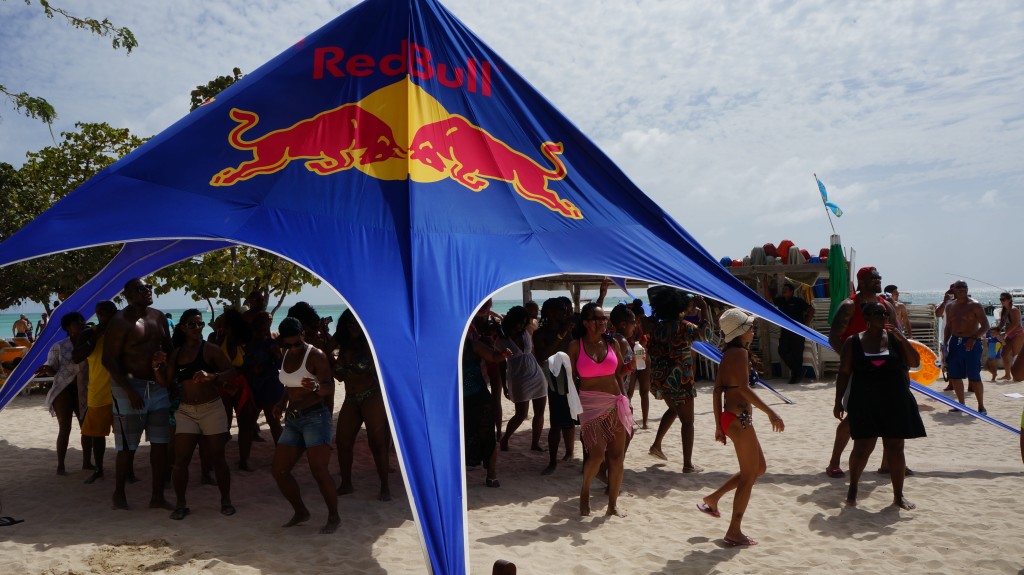 Partying under the RedBull tent on Moomba Beach 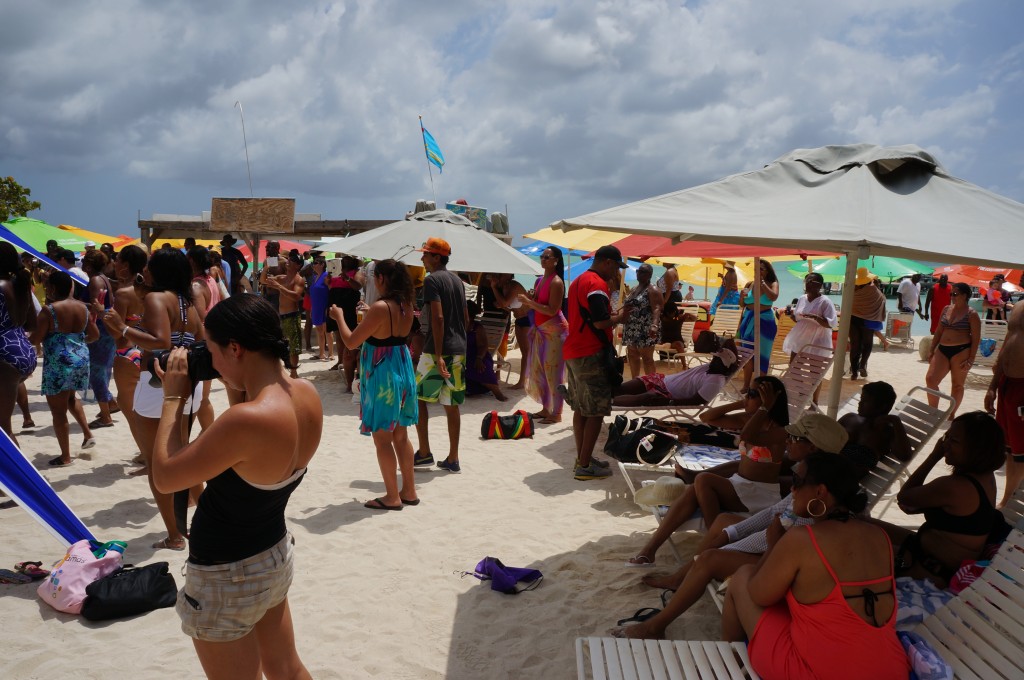 Partying along the fringes of Moomba Beach 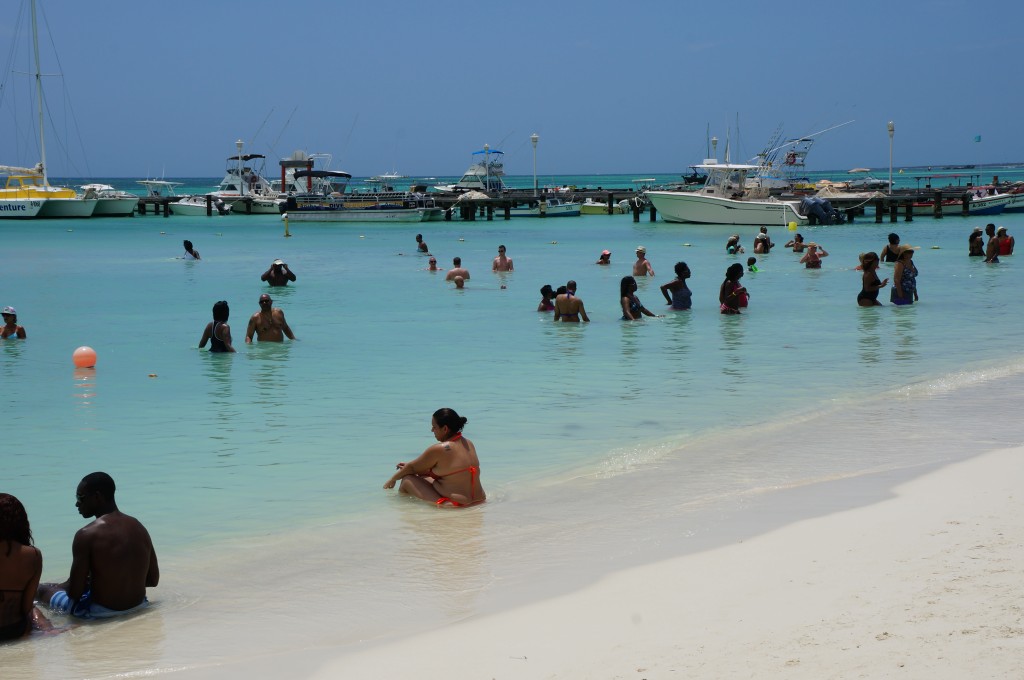 Cooling off in the clear blue water 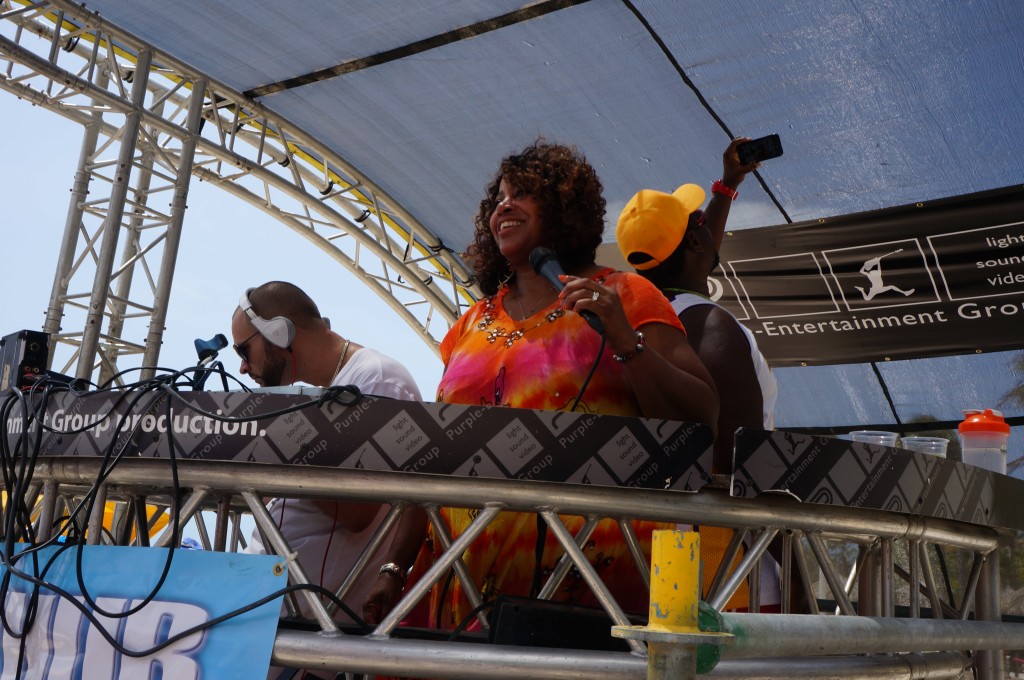 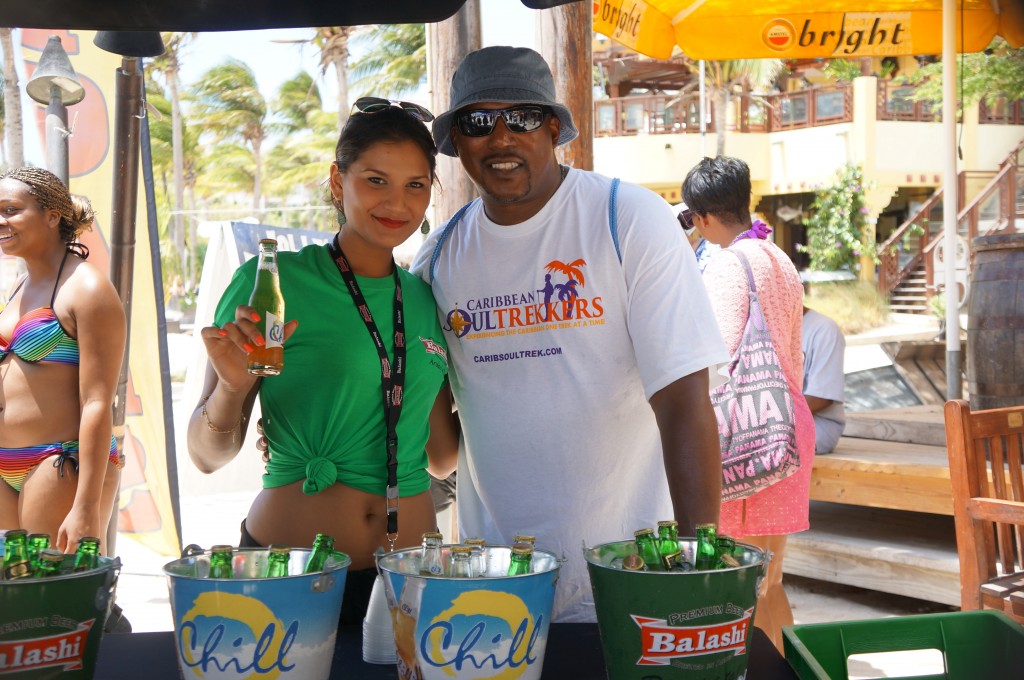 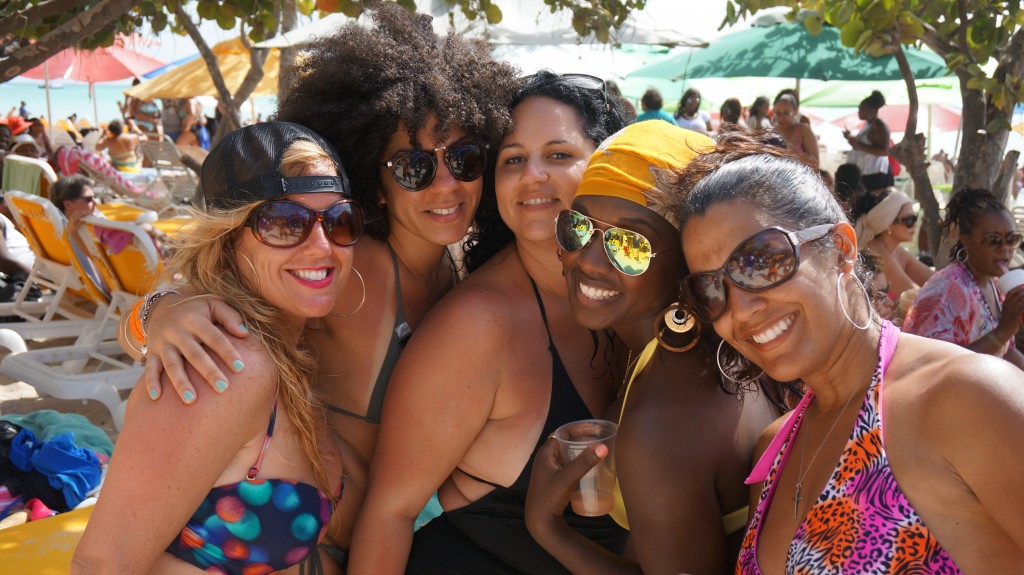 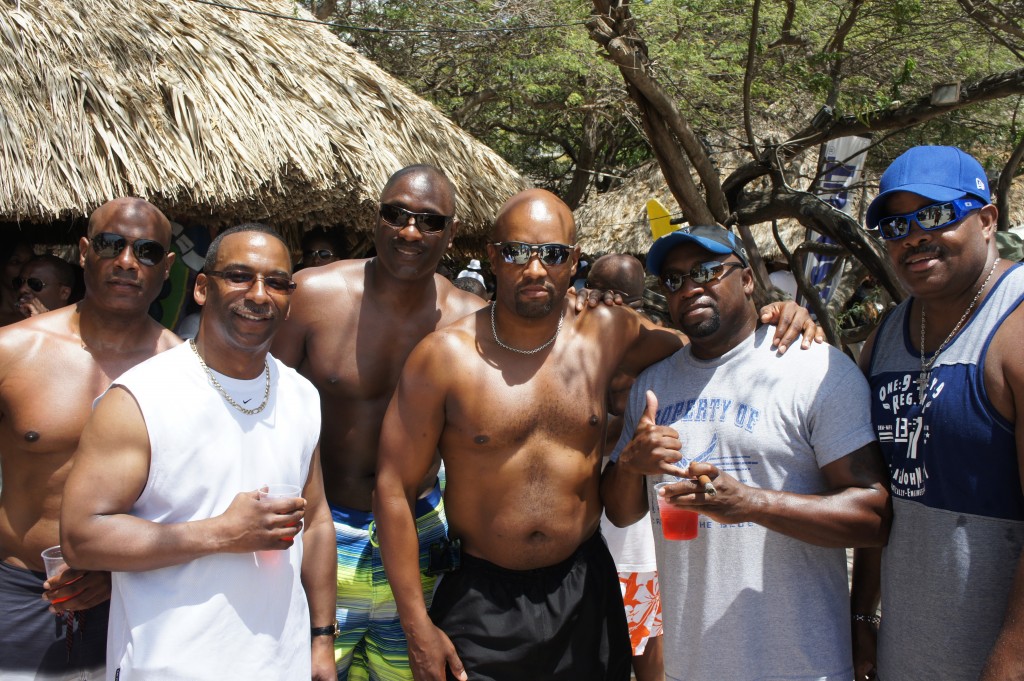 Fellas keeping their cool at the Soul Beach Music Fest 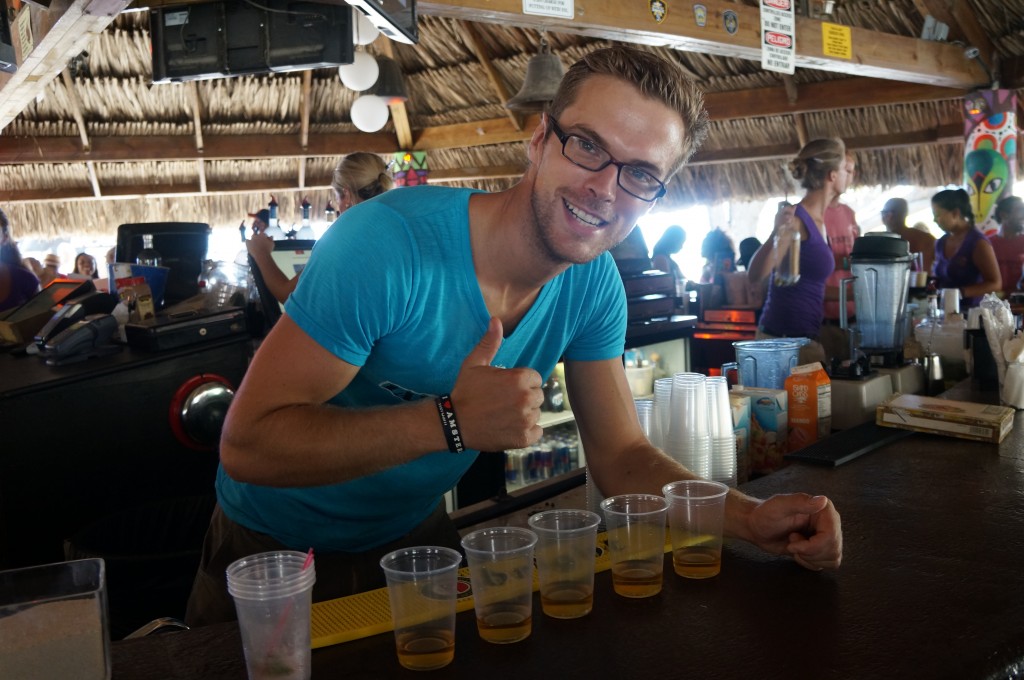 Even after the sun had set, Soul Beach continued to sizzle at a trio of distinct venues: Hardrock Cafe on Thursday, Renaissance Convention Center on Friday and Reflextions Nightclub on Saturday and Sunday. Once they had brushed off the sand and changed into attire worthy of South Beach, Miami, Soul Beach goers kept the parties going well until the early morning. 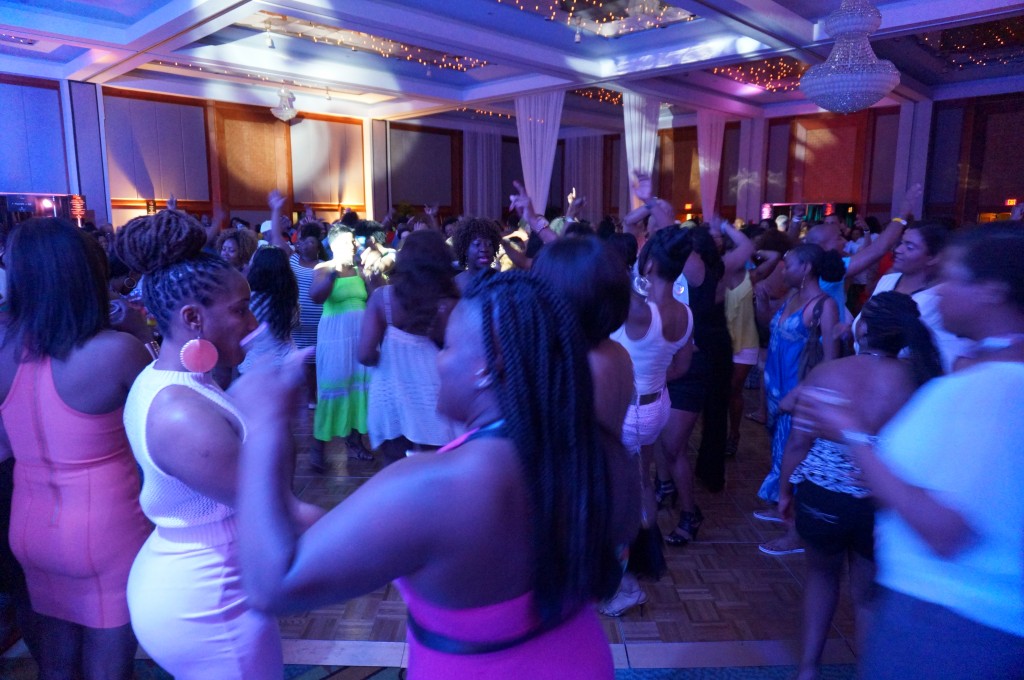 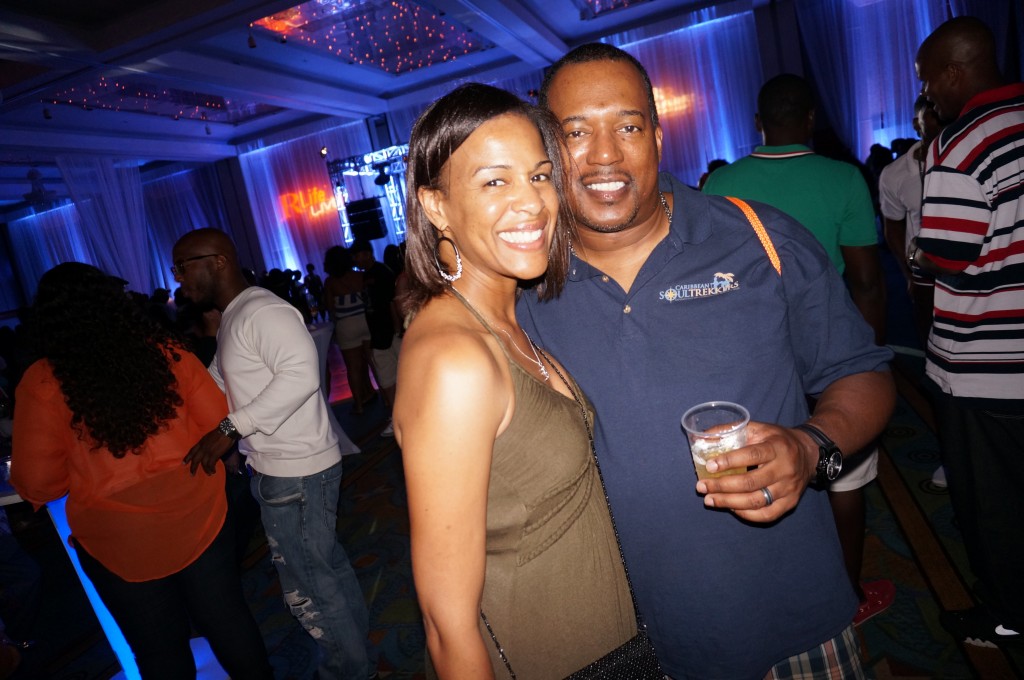 Reflextions Nightclub (formerly Nikki Beach Club) was proud to present the one and only DJ MC Lyte on Saturday and Sunday. But that wasn’t the only thing it had going for it. Its large size and location just steps away from the concerts made it the obvious choice for the post-concert crowd to keep the party going. 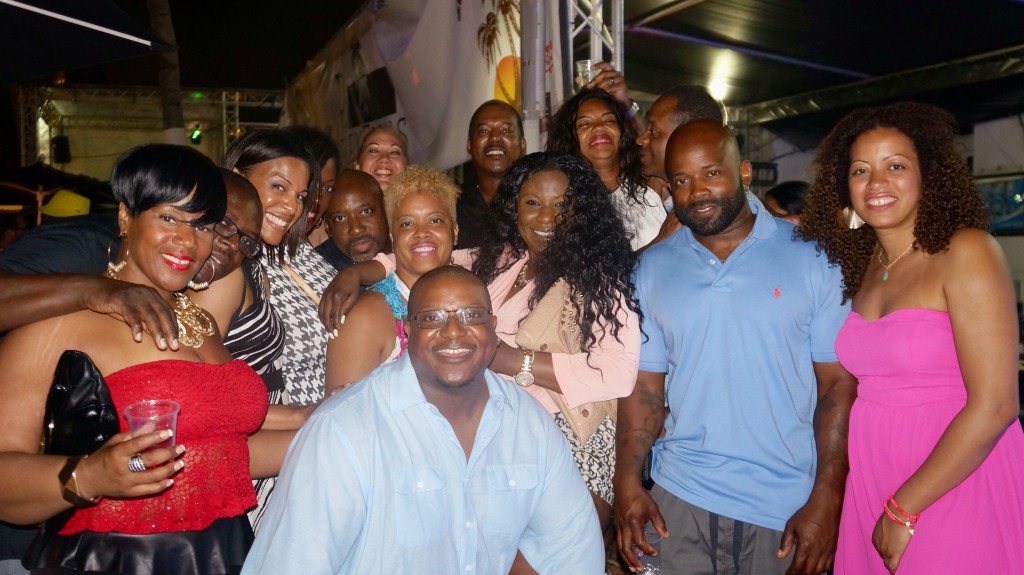 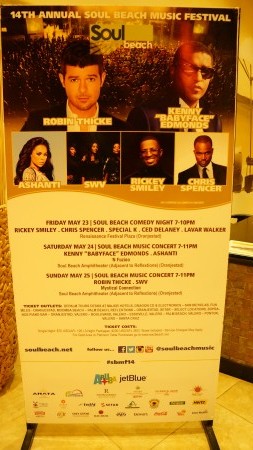 The Stellar Line-Up from the 2014 Soul Beach Music Festival

Saturday and Sunday evenings featured back to back concerts. This year’s line-up included local bands, Ashanti, Babyface (Saturday), SWV and Robin Thicke (Sunday). Although all of the performers were amazing in their own right, experiencing them on the beach under the moonlight and with ocean waves crashing in the background catapulted the experience to another level altogether! 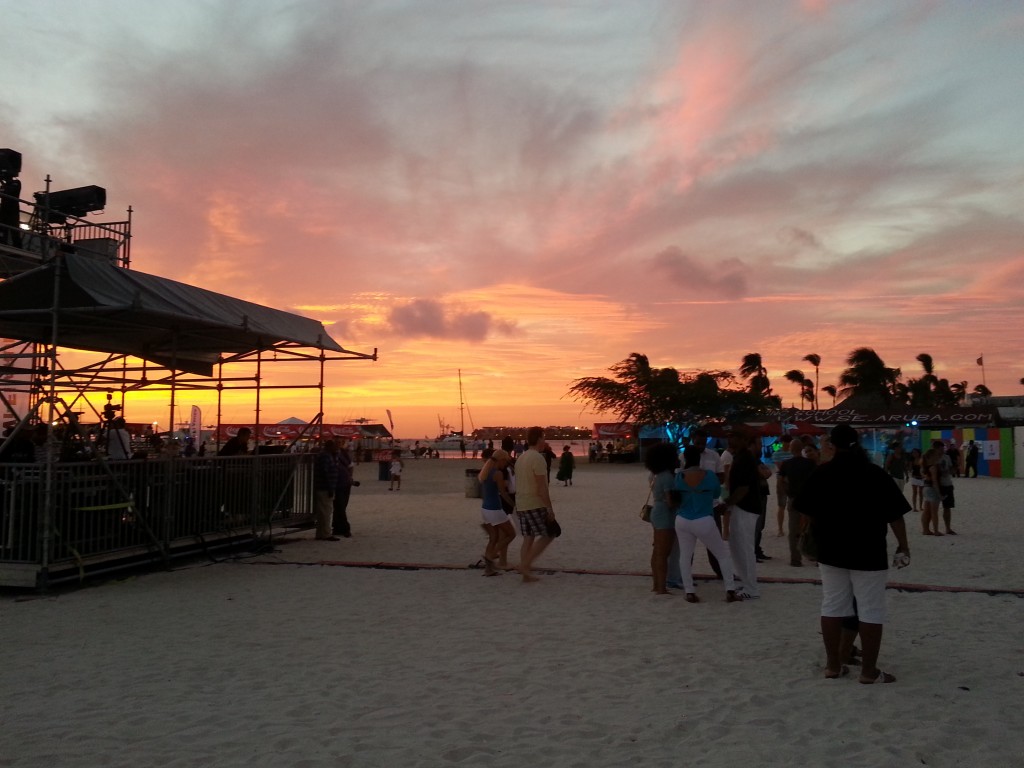 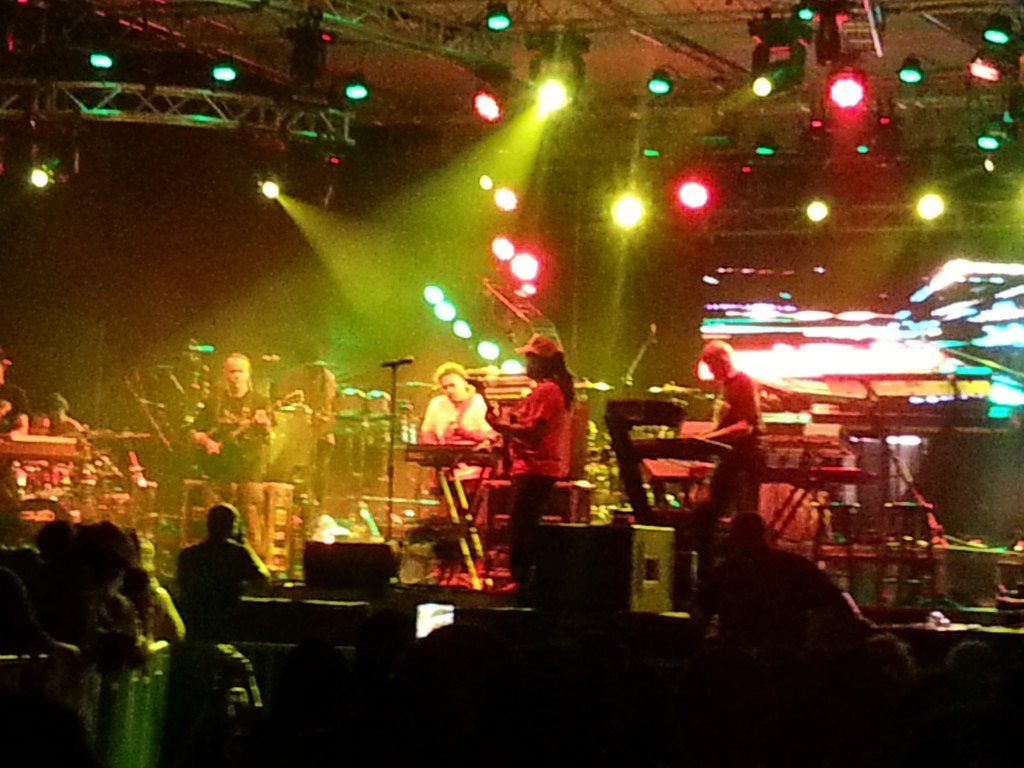 Local band, Mystical Connection, got things off to an amazing start before SWV and Robin Thicke hit the stage.

For five days, SBMF had heated up Aruba’s beaches and nightlife. Its sixth day was finally the time to wind things down. Music boomed over Moomba Beach and drinks flowed from the bars while Soul Beach Music Fest-goers soaked in their final hours of the dazzling Aruban sun and cooling trade winds. Over the sounds of music and chatter, we regularly heard awe-struck attendees making plans for next year’s Soul Beach Music Festival. The event’s organizers promise that the fifteenth Soul Beach Music Festival will be spectacular! We can’t wait to see you there! 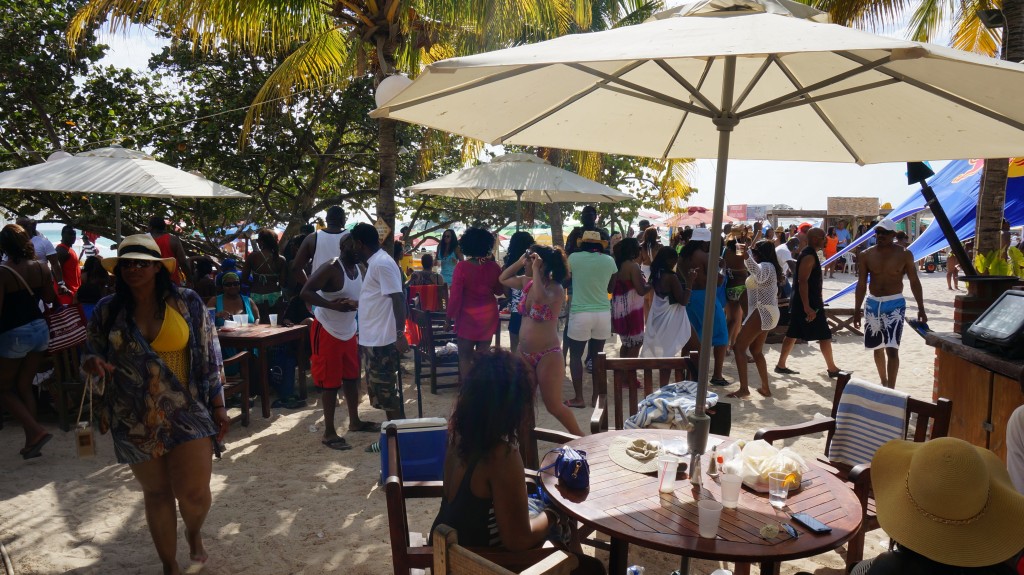 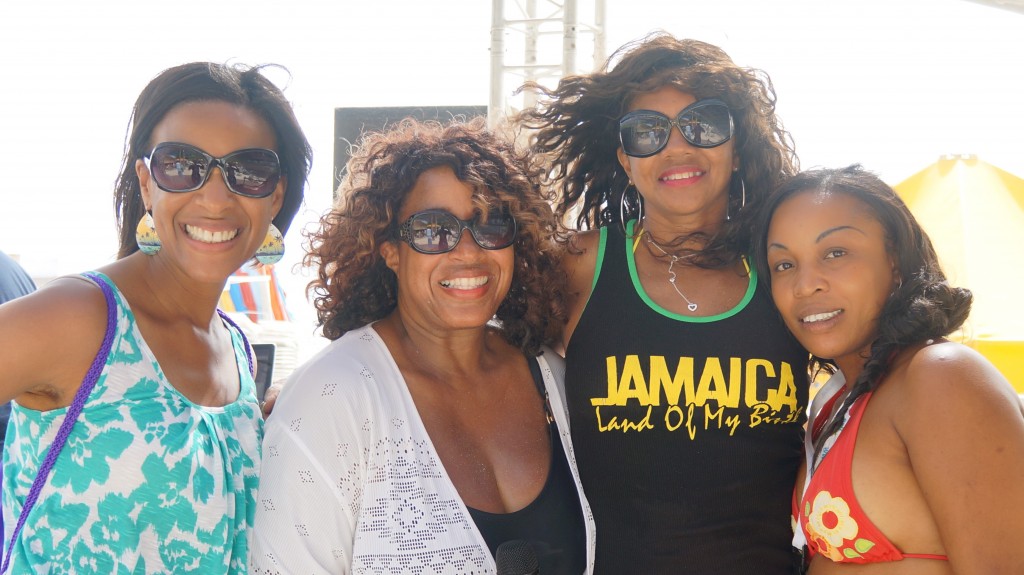 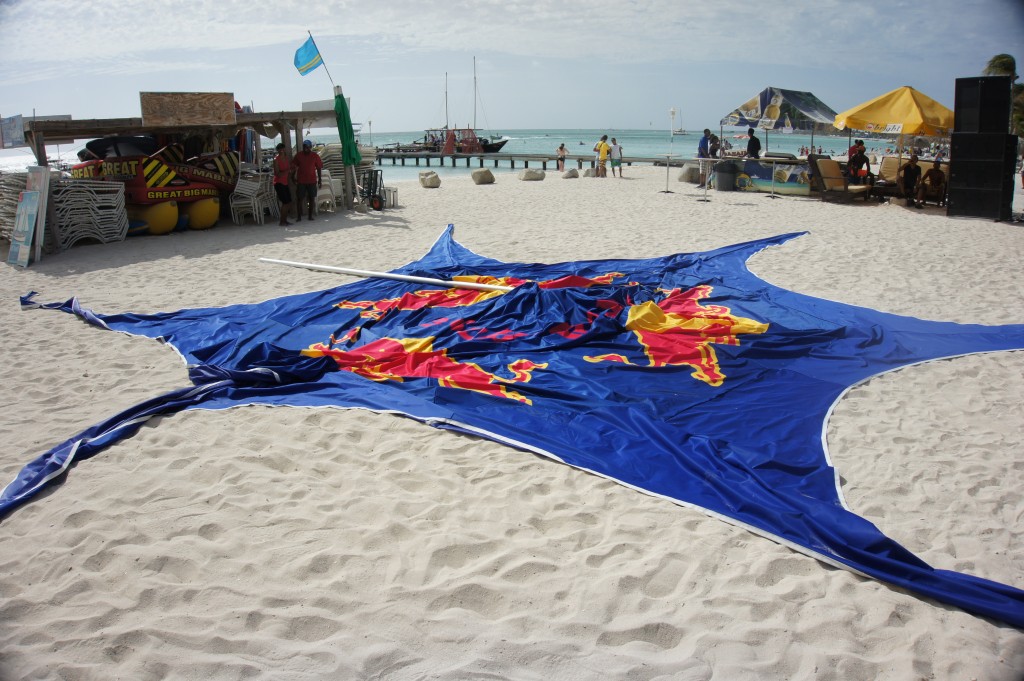 Party over until next year