We’re so happy we were able to squeeze in a last minute jaunt to St. Thomas for the Castaway Winter Beach Bash. In the true nature of a CST jaunt, our only goals were to meet great people, go with the flow and stuff ourselves with as much delicious food and drinks as possible. All goals were met!

A quick bit of St. Thomas history:
Despite being settled first by the Ciboney people of South or Central America, next by the Arawaks and third by the Carib Indians, St. Thomas’ first settlers are often cited as the Dutch who used the island as a slave outpost for sugar cane production in the late 1600s. This also marked the start of a brief period of heavy pirate activity on the island. St. Thomas rose to become the trading center of the West Indies by 1800. Although slavery was abolished in Denmark by 1803, it took almost fifty more years for slaves on the island to be granted their freedom. The island then faced economic decline until it and sister islands St. John and St. Croix were purchased for $25 million in gold to secure the U.S.’s strategic position in the Caribbean Ocean during World War I.

Starting your vacation in St. Thomas:
Because it remains a U.S. territory, Americans can easily access this caribbean island without suffering through a tedious customs screen. After exiting the airport, head out the the taxi stand out front where there is an efficient system established – tell the coordinator your destination, wait in a group with other people heading in your general direction, board the taxi van when there are enough passengers to fill it. The vans only leave when they are full (14 people). Taxi fares are standardized according to destination. It’s a good idea to clarify the fair before starting the trip.

The Trek:
We arrived on the property and received a warm welcome from staff. Check in was painless and we were in our room several minutes later. After a few minutes more, we had settled into our loungers on the beach. It still amazes me to wake up to the chill of a Northeast winter’s morning but to spend the afternoon lounging on a Caribbean beach with nothing but a tropical breeze to tickle my toes. Later that evening, we had our first taste of the resort’s infamous Iggie’s Beach Bar/Beach House Restaurant during their over the top Caribbean Carnival. With a steel drum band, a mocko jumbie dancer, a limbo dancer/glass walker, an impressive Caribbean buffet and Iggie’s Voodoo Juice by the bucket, it turned out to be just the whirlwind of Caribbean sights, sounds and flavors to jump start our vacation.

For our first full day on the island we scheduled a two hour tour to points along its highest elevations. This gave us true appreciation for St. Thomas’ topography (what a contrast to the flat island of Aruba where we had spent Thanksgiving). We departed with great hopes of capturing photos overlooking Magen’s Bay, of nearby virgin islands and of the cruise ship-filled bays en route to Charlotte Amalie. Unfortunately, mother nature did her best to crumple those dreams. The entire morning was cool (it’s just not right to say cold when it was in the 30s back home), wet and foggy. The limited visibility steered our attention towards the island’s greater commodity – spectacular people. We especially appreciated Benny at Beacon Point for making an awesome banana daiquiri and sharing his hilarious stories about his first (and last) experiences with snowy Northeast winters. It seemed a more personal way to enjoy the island’s renowned banana daiquiris than with the hurried crowd at Mountain Top, our next stop. There, we got our fill of picture-taking within minutes (it was just too rainy) then had fun browsing the expansive souvenir shop while waiting for the rain to subside. That evening, we reunited with the Castaways for drinks at the resort’s Lobster Grille, dinner at the amazing Coco Blue Restaurant (please see separate post) and a bar stop at Duffy’s Love Shack (don’t miss the Lime in the Coconut drink).

Here are some pics from the first part of our trip: 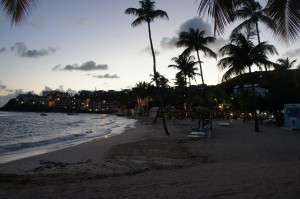 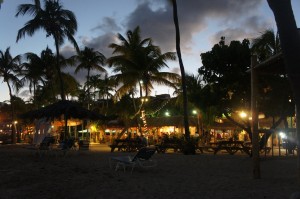 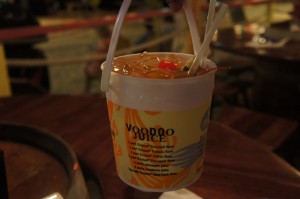 A bucket of Voodoo Juice will get your party started 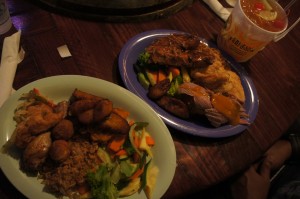 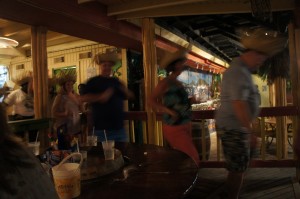 Proof that the Voodoo Juice is working 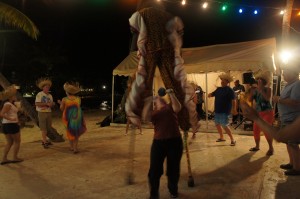 Limbo dancing under the Jumbie dancer 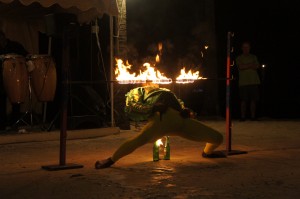 Not just your ordinary limbo dancer 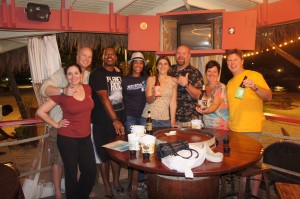 Caribbean Soul Trekkers, RumShopRyan and the Castaways on our first night on the island

The view from Beacon Point on a misty day 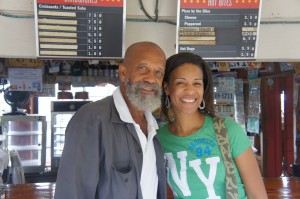 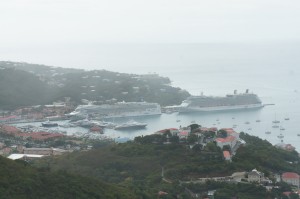 Looking onto the Harbor 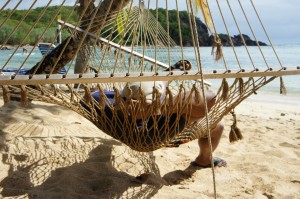 Mango Eddie limin’ at the resort 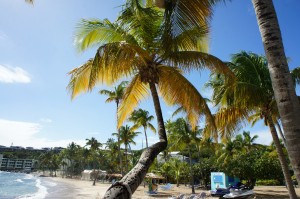 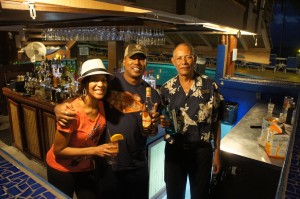 Hangin’ with Steve the bartender at Bolongo Bay’s Lobster Grille

Make sure you read next week’s post, Trekking in St. Thomas: Part 2!